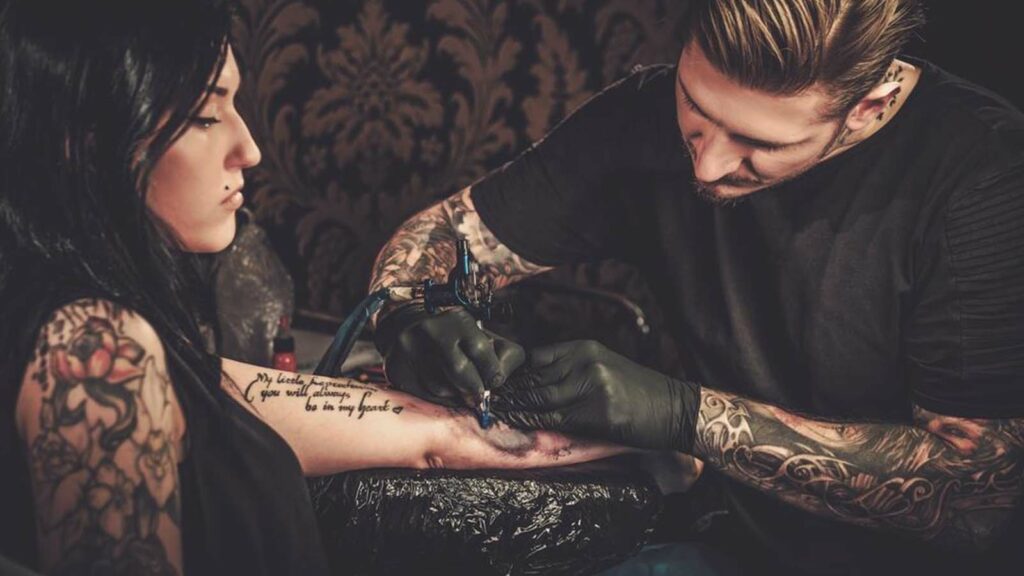 Gambling tattoo designs are among the most requested ink ideas around the world. The reason behind the popularity of this tattoo style is the fact that both gamblers and ink enthusiasts are risk-takers. Casino-related symbols like a royal flush, ace of spades, or roulette are a common tattoo theme even for people that aren’t gamblers because anyone can relate to the quote “Life is a gamble.”

When it comes to getting inked, attention to detail is a crucial factor. Therefore, you should choose a tattoo artist that has experience with complex shapes and knows how to pull off gambling tattoo designs. Our advice is to spend more time researching for a talented artist instead of randomly choosing one that might have poor drawing skills or never made a casino tattoo before.

If you’re planning to get a permanent gambling tattoo, you should first decide what kind of symbol suits your personality and style best. Let’s have a quick look at the most appreciated gambling symbols that you could include in your next tattoo:

The ace of spades (a.k.a the Death Card) represents the most valuable card in the deck of playing cards and is present in many gambling tattoo designs. This symbol became popular during World War II and the Vietnam war when American soldiers would get it inked or painted on their helmets as a good luck charm. Nowadays, it’s commonly inked on bikers, gang members, or gamblers.

We all know poker is more than just a casino card game. It involves both luck and advanced strategy, and many players refer to it as the card version of chess. The Royal Flush is the highest poker hand, made from cards 10 to A of the same suit. If you played poker before, you probably know how rare a Royal Flush occurs. Therefore, people that get this type of tattoo usually think of it as a symbol of success, power, and winning.

After reading around some tattoo enthusiasts forums, we’ve found out that many poker players were getting the Royal Flush inked on their bodies after a colossal win. However, not all people that have this gambling tattoo are poker pros. They just like the meaning behind the symbol. Another popular poker hand tattoo is Four of a Kind with Aces, which is among the highest hands in the game, and it has a similar meaning.

Since the dawn of civilization, rolling the dice was considered a symbol of betting and risk-taking. While dice tattoos are usually part of a larger design, such as a gambling sleeve, they also have their hidden meanings.

A simple dice tattoo represents the uncertainty of the future. If the dice are depicted with flames around them, the tattoo could symbolize that luck is by your side or a burning passion for gaming. Additionally, the numbers on the dice might have a personal meaning for the person, like birthdays or their lucky numbers.

A skull tattoo symbolizes overcoming a difficult challenge or even death. The skull is associated with strength and power, and people that wear this type of tattoo are granted protection against bad luck. When paired with casino elements, skull tattoos represent recovering from a losing streak or beating the odds and winning in an unlikely situation.

Lady Luck is a classic symbol of prosperity, and it is usually depicted as a beautiful woman next to some casino symbols like cards, dice, or roulette. Getting this tattoo inked on your skin is a representation of a sign of good fortune, and you usually get it after a massive win at the casino or after a fortunate event in life.

The cherries are symbols from the paytable of classic slot machines. However, their origin dates back when getting three cherries on a lottery ticket meant that you won the big prize. Years later, the cherry symbol became one of the main gambling tattoo symbols of pure luck.

The lucky sevens are the highest paying symbol in classic slot machines. If you’ve ever gambled on slots before, you probably came across the lucky 7s. In the tattoo world, getting the 7s inked represents a symbol of pure luck in the casino or life in general.

Another interesting fact about this legendary number is that 777 is considered a highly spiritual angel number that referred to as a sign of getting Divine Guidance in the Holy Bible. People that get this magic number inked usually pair it with other symbols that are representative of a significant life event.

The eight ball tattoos emphasize the idea of chance. Because it represents both good and bad luck, people that get it inked on their skin usually refer to it as a balance between the two types of fortune. In the pool community, the eight ball is the most essential ball from the rack, and it represents the win condition.

The Wild Card or Joker tattoo is a symbol that vibes with the limitless desire of its owner to dangerous games and passion. In card games, the joker can be a sign of good fortune, but it can also represent deceit and bad luck. As a gambler, risk-taking is a quintessential attribute, so having the joker tattooed on your skin could symbolize that you live for the thrill.

Poker chips are the plastic pieces that represent the win condition in a poker game. In fact, one of the reasons why poker is considered a casino game is that you can get addicted to acquiring a large stack of chips. If you’re looking for a gambling tattoo for poker enthusiasts, the poker chip is a great choice.

These chips represent more than the love for poker. They illustrate a symbol of love for life. But how? Well, a stack of chips is not just currency for a card game, it represents an additional chance to win or a valuable thing that displays your ability to defeat your opponents. People that have this tattoo design inked on their skin usually say that it is a sign of a previous victory and more to come.

Not long ago, Las Vegas was mostly an immense desert, and there wasn’t much going on. But how did a deserted land become the world’s number one gambling destination?

Well, some Italian Mafia gang leaders used blood money to build the opulent casinos, hotels, and showgirl theatre because they had a lot of political influence and wanted to take advantage of their position.

At first, the business was mainly targeted towards male dam construction workers. Still, over the years, it became a luxurious destination for gambling and vice enthusiasts all over the world. While the mob was barred from Vegas after “The Black Book” initiative in the 1980s, they are still the creators of the most entertaining city in the world.

People that get Italian Mafia tattoos often combine them with roulette or other gambling-related symbols, which is a tribute for the mobsters that built Las Vegas. Different people consider it a sign of respect for the Mafia, which is notorious for their ties with the casino industry.

The whiskey glass and Jack Daniels bottle are usually secondary elements of gambling tattoos. The reason why people associate drinking strong beverages with casino games is that many poker players think that being drunk enhances your skills. However, professional poker players consider that drinking while at the table is a bad idea because you won’t be in your best state of mind.

Now that you have a better understanding of the symbols, it’s time to compare some gambling tattoo designs and see what you like most. While the meaning behind a tattoo is significant, you should choose something that suits your style and personality. After all, you’re getting something permanently inked on your skin.

Similar to picking an online casino, choosing an ideal tattoo design will take time. If you are planning to get a high-quality tattoo, make sure you invest some time seeking a design that perfectly matches the meaning of your personal experiences.